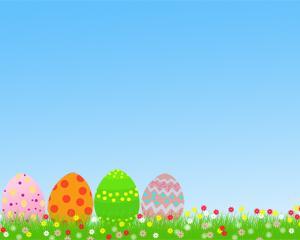 Easter is one of the most important celebrations for many people and cultures because it is a wonderful combination of rituals, culture, beliefs and legends.

According to Christian conception, during the Easter evokes the passion, death and resurrection of Christ. Is the most highlighted event in the liturgical calendar.

But the question is, what relationship do the icons of Easter we know today, such as the eggs represented in this powerpoint template, rabbits and threads, with this conclusion? Has it the same sense as a religious event in ancient times?

Since immemorial times, mankind has witnessed various festivities, which are considered sacred to many parishioners. However, often the case that mixes the sacred with the profane, as a syncretism of many cultures. Many pagan observances were rescheduled until finally coincide with the celebration of Easter.

The true origin of Easter dates back to 1513 BC, when the Jewish people began their exodus from Egypt into the Promised Land. It is celebrated each year as a reminder of the liberation of the Jewish people.

You can download and share this free powerpoint with your family and friends, once you have a brief introduction about the origin of these holidays.