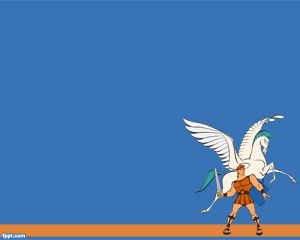 When Hercules was born to Alcmene, she named him Herakles. But in Roman, Herakles is pronounced Hercules, which is the name we use for Hercules to this day. This is Hercules PowerPoint template containing  Hercules hero in Greek. This Hero from greek mythology is a great figure of valor and muscle strength. Hercules bravery earned him a place among the gods. After he left the mortal world, he found a position on Mount Olympus, the gods’ dwelling place. Zeus, the King of the gods was an unfaithful husband. He had a weakness for worldly pleasures. He fell in love with Alcmene, the wife of Amphitryon. In a short time, Alcmene conceived Hercules. This angered Hera and she tried to kill Hercules. Hercules survived his first fatal assault with a miracle. The template contains a blue background and it is nice to make strong PowerPoint templates for example to be used by entrepreneurs or new startups or big companies. The template is free and it’s also for users who are looking for Greek PowerPoint or Mytology PowerPoint.